The race starts in Devizes and is 125 miles long and has 77 portages.
FIND OUT MORE

The next 55 miles are on the River Thames to Teddington.
FIND OUT MORE

A race to raise awareness and funds for two charities. Alzheimer’s Research UK which is the UK’s leading dementia research charity and MS-UK

We competed in this years Devizes to Westminster International Canoe race to raise awareness and funds for two charities. Alzheimer’s Research UK which is the UK’s leading dementia research charity and MS-UK which was established in 1993, and is a small national charity dedicated to empowering people affected by multiple sclerosis (MS) to make the most of today, and live life to the full.

We made good progress on day 1 in difficult conditions, with the tow path along the Kennet & Avon canal around the portages resembling a quagmire. The constant wind and rain reminded me of DW 2016, although it was nothing like storm “Fiona”. Like many competitors in this years event we had our run in with “Psychotic Sid”, the male swan who lives near Honey Street. He decided to let us pass him, and then chased after us, landing on the stern of our C2. Maybe he was unhappy that we did not give the him the bread roll we bought to pacify him!

We reached Newbury after > 8hrs of non-stop paddling which was disappointing, but given the conditions and delays around portages was a respectable time.

On Easter Saturday we were ready to launch FGMN II by 07:15am in Newbury for day 2 of the four day race. We made excellent progress through to Aldermaston. At Tyle Mill lock, the weir stream enters the canal from the left hand side. It was clear that the continuous rain over the weeks before the DW race had increased the flow considerably, as the flow rate from the weir stream was significantly higher than during our training sessions.

At Gartston lock we were held up due to a boat moored in the lock cut, where you put-in after having navigated the narrow gap between the pill-box and lock gate, so only one canoe at a time could be put-in. The weir stream comes from the left hand side and it was moving very quickly. We were now seeing more debris in the canal, which had been washed off the banks of the canal and surrounding fields.

The next portage is Burghfield lock, where the weir stream comes from the right hand side and it was very clear that the volume of water joining the canal was rising rapidly. On the outskirts of Reading is Fobney lock, where the primary put-in is under a low foot-bridge into a fast moving weir stream. With the volume of water in the weir stream, and the conditions of the sloping grassy bank, there was a queue of boats waiting to put-in. So we decided to put-in further down stream on the left hand-side of the canal. All went to plan until we tried to squeeze past a tree stump and we rolled over ever so slowly. After 4 hours of paddling it was quite refreshing to go for a swim! After emptying FGMN II, we continued paddling into Reading and it became very clear that the canal was now very swollen as banks and peoples gardens were submerged.

As we approached Country lock the marshal advised everyone that the race was being stopped the other side of Reading at Dreadnought Reach due to the dangerous conditions on the river Thames. Which was deflating to say the least, after > six months training and preparation. The put-in at County lock is usually straightforward, but the volume of water meant the weir was submerged and water around the put-in resembled a boiling cauldron. After reassuring a female crew from the Netherlands that it would be fine if they followed the boat in front it was our turn. The canal flows through the Oracle Centre in Reading after County lock, so it is not the place to go for a swim. People were cheering and clapping as the canoes went through, which after five hours of non-stop paddling was very much appreciated.

As we joined the river Thames at Dreadnought reach it was very apparent that the flow rate had increased considerably from when we completed our final training session two weeks earlier.

After this years race we donated our Darkside Duet C2 ‘Forget Me Not II’ to the Henley Canoe Club to support their training program for endurance canoeing and would like to express our sincere thanks and gratitude to our main sponsor The Frog at Skirmett which is located near Henley on Thames, and makes the most amazing flap-jack. Our staple food source during the two days of paddling.

So, with Easter 2019 being three weeks later – 19th / 22nd April we believe we will have a good chance to cross the line in FGMN II and walk up the infamous steps at Westminster bridge to collect our medal. We will announce our chosen charity later this year, so follow us on Twitter for the latest news.

We hope to raise at least £10,000, half of which will go to Alzheimer’s Research UK. The rest will go to Multiple Sclerosis UK 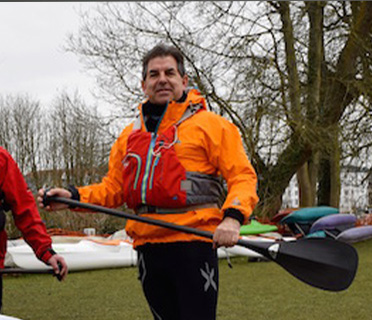 Canoeist
Chris is no stranger to the event, having previously competed in 2016. Unfortunately, the journey didn’t quite go to plan, and he was forced to retire due to injury and poor weather conditions. 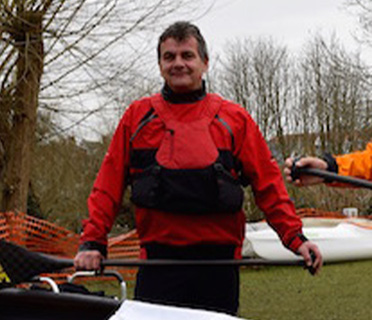 Canoist
The pair are undertaking the four day expedition in memory of their fathers, who both died from dementia.

Two men from Henley are set to tackle a 125 mile canoe challenge in aid of charity. Over the Easter weekend, Chris Bishop and Paul Reynolds will paddle from Devizes to Westminster for Alzheimer’s Research UK and MS UK, hoping to raise £10,000. The pair are undertaking the four day expedition in memory of their fathers, who both died from dementia. 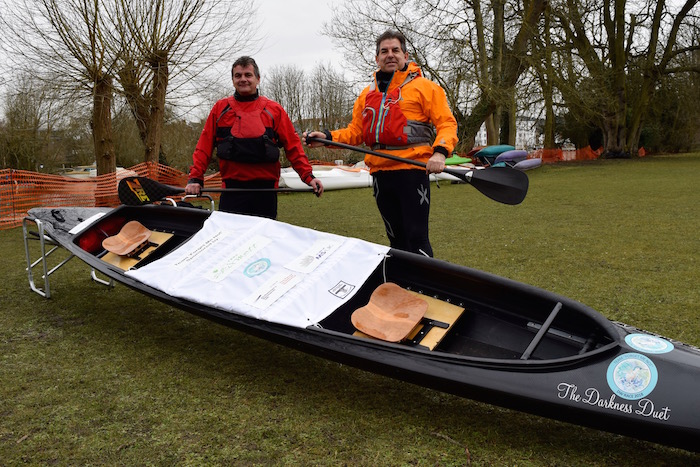 Chris Bishop from Henley who is competing in the Devizes to Westminster International Canoe Race (the world’s longest non-stop canoe race) this weekend had his attempt nearly curtailed after his original team mate Chris Preston damaged his right rotator cuff muscle during a warm-up race, the Waterside C, and withdrew on Monday 29 Feb. 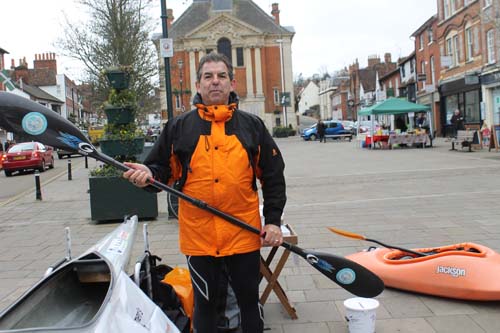 No. of paddle strokes

No. of miles paddled